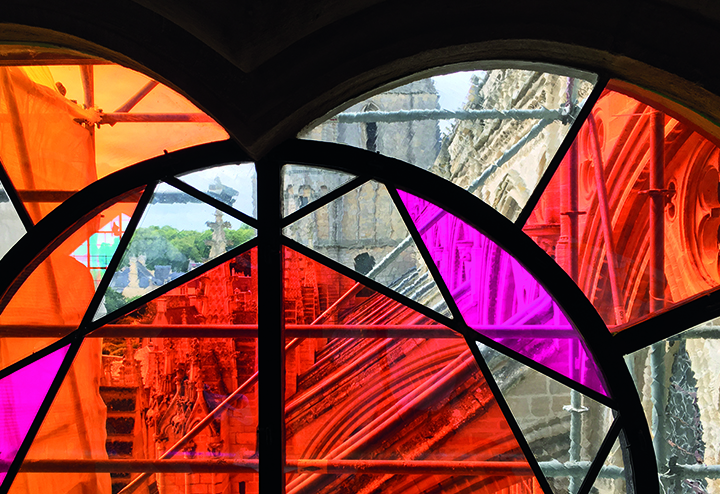 Creation of original contemporary stained-glass windows in the transept of the Cathedral of Notre-Dame in Bayeux, a work conceived at the request of regional direction of cultural affairs in Normandy as part and with the support of the public commissions programme of the Ministry of Culture.

My first instinct for the new stained-glass windows in Bayeux Cathedral was to use glass prisms. I wanted prisms that would refract the light in multicolored projections throughout the interior of the cathedral, while retaining the intensity of light that penetrated each window into the very heart of the cathedral.

The colors for each bay window were chosen according to its geographic orientation: the northside windows are composed of a cooler range of lights, and warmer on the southside. Windows facing east, which are lit up in the morning, are clearer than those to the west, where the sun sets.

The prisms are actually faceted crystals made of dichroic glass in the shape of triangles or trapezoids, each corresponding to the shape of the window tracery under each tympanum, whether polylobes. Depending on the angle of view and the exterior light, this type of glass can reflect a transmitted light into different colors inside as well as outside the cathedral.

The colors chosen for the bay windows, the type of glass in which the crystals were inserted, and the technical problems in mounting them were designed during many visits of close collaboration with the glass workshop of Franz Mayer & Co, in Munich.

The crystals were conceived and designed with the Institute d’Optique Graduate School, Paris-Saclay. Each one took into account the characteristics and placement of each window, its height, and orientation to the sunlight.

Along with the optical properties of each crystal, the shape and volume of each was calculated to produce a burst of color on a scale with the grandeur of the cathedral’s windows.

Tests made inside the cathedral helped to refine the tech­nical and aesthetic decisions. It was important to verify, on site, how the crystals and the colored glass would react to the particular light entering the cathedral.

By using lead tracing, the crystal prisms were set in hand-blown antique glass. Each was installed at the crossing of two implied lines, one vertical and one horizontal, but situated at different places in each bay window, in an almost musical composition.

A test window was installed in October 2014 by the Franz Mayer & Co glassworks. This made it possible to specify the characteristics necessary for the antique hand-blown glass in which the crystals would be set along with the mounting techniques necessary for each.

The shape and the techniques necessary for inserting each crystal prism led to the general design of each window. The clear parts, made of antique blown glass, determined the transparency and created a link between the upper and lower parts of each bay window.

The antique glass panes in which the crystal prisms were set were hand-blown at the Saint-Just glassworks in the Loire Valley. Each plate was made to visibly reveal its hand-manu­facture, which contrasts with the industrially made crystal prisms.

In 2019, work began on bays 120 and 122, which face southwest. It took several months on site for the stone masons to cut and stack the window stones.

In Le Mans, the different elements of the two bays were prepared. There, in collaboration with the Vitrail France glassworks, the technical constraints of the stained glass were worked out and assembled in accordance with the spirit of the project.

The upper parts of windows 120 and 122 are made up of more than 170 pieces of colored dichroic and antique hand-blown glass.

Dichroic glass is made by fusing a glass surface with different metals (aluminum, chrome, magnesium, silicon, titanium, or zirconium), which creates varieties of reflective colors, depending on the angle of view. The method was developed by NASA for satellites to withstand high temperatures. Each piece of dichroic glass was also assembled and reinforced at Vitrail France glassworks.

The technical aspect and quality of dichroic glass allows it to interact with daylight, while also extending the color effects normally seen only at night.

The colors and the effects of the crystal prism change with the weather and with the light, depending on where they are seen from. Visitors at the Bayeux cathedral might also benefit from the nuances typical of the Normandy sky.

Of the eight bay windows on both sides of the transept, two were installed in 2019. The large, nineteenth bay at the south end will be completely restored in 2020. One year’s work is required for the stonework and the glass for each side. The finished work is expected to take until 2024.

In 2014, the art historian Michel Gauthier wrote an essay about the project, entitled, Shards in Stained-glass. It is available here.